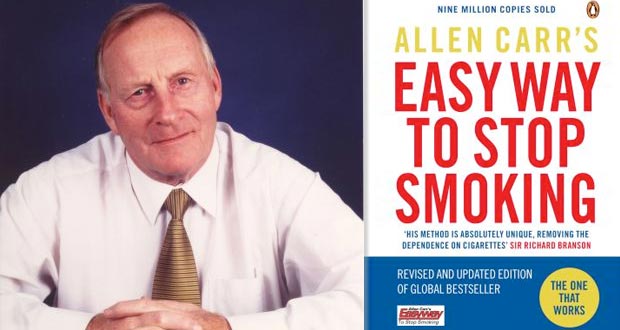 Many of us students struggle to give good smoking cessation advice to our patients as most of us don’t fully understand what it’s like to go through the process of stopping smoking.

Carr was a heavy smoker himself, smoking up to 100 cigarettes a day. He quit in the early 1980s, and wrote a book on Smoking Cessation called “The Easy Way to Stop Smoking”. This sold over 13 million copies worldwide and was translated into 38 different languages. Alan died 10 years ago of lung cancer but did not fail to leave behind a legacy in the form of his Smoking Cessation company which now runs clinics in over 45 countries around the world.

Allen wrote his first book in 1985. He quit his job as an accountant and started giving people smoking cessation advice in one-to-one sessions from his own home. Allen Carr doesn’t believe in the use of nicotine patches or gum, in the process of smoking cessation, as he feels the continued use of nicotine will “keep you hooked” – and giving someone nicotine to stop them being addicted to nicotine, doesn’t make sense. His main way of smoking cessation is via hypnosis! This method and philosophy of smoking cessation teaches that, contrary to a persons own perception, when you smoke you do not receive a boost or hit from smoking a cigarette. Rather what happens is that smoking only relieves the withdrawal symptoms from the previous cigarette, which in turn creates more withdrawal symptoms once it is finished. So the idea is that when you have a smoke there is no relief – you are just returning back to a normal state (which is dropping in status to the health of a non smoker each day). Allen’s company is finally embarking on a randomised clinical trial of its own with a London University and the results may lead to acceptance of his smoking cessation method on the NHS.

Joyce, Allen’s wife, describes Allen as someone who “hated smoking” and says he said he wanted to “cure the world of smoking”. With the percentage of UK smokers being the lowest it’s ever been, maybe his wish is coming true…Half a century ago, teachers used to smoke in front of pupils indoors, doctors used to smoke during their consultations with patients, and even prescribe them menthol cigarettes for their chest problems!

Take a look at Allen’s website here https://www.allencarr.com/ to find out more about his smoking cessation program and read success stories from individuals from all around the world.